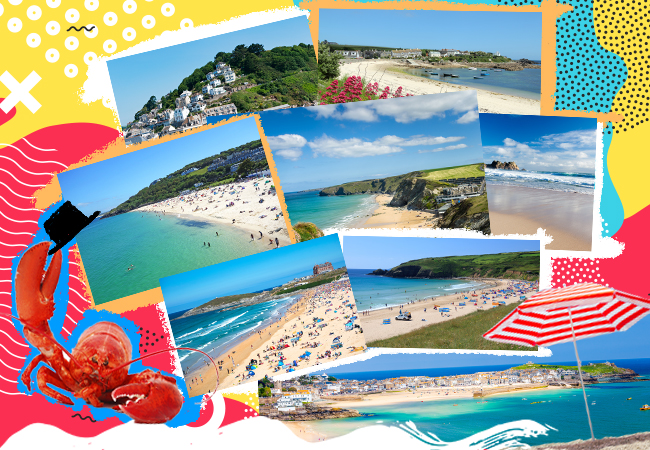 Cornwall is almost entirely beach, with its rugged coastline stretching from south to north for over 400 miles and no inland area more than 20 miles from the sea. As we Brits fall back in love with the Great British Holiday, many of us will hopefully flock to Cornwall this summer wanting to experience the crystal-clear waters, impressive surf, world class seafood and postcard villages. The beaches with the best surf are well-known to locals and tourist alike, but this veritable water world is littered with hidden coves and secret sands, perfect for a secluded swim.

This secret cove is situated one mile south-east of Land’s End and has no direct access from the road. You can reach this slice of paradise by the South West Coast Path from Land’s End in the north, or from Porthgwarra in the south. Also known as Mill Bay, this sandy cove at Nanjizal Beach was once the site of a watermill of which there are still some ruins, giving the area a distinctly priate-y feel. The natural stream that used to power the mill now flows over the rocks and across the beach emptying in to the sea in front of the Song of the Sea, a tall narrow natural rock arch that captures the rays on a sunny afternoon. By far one of Cornwall’s loveliest beaches, Nanjizal is also one of its emptiest, so you can enjoy your own private beach with no sun lounger fights in sight.

A stunning cove of azure choppy water, the Bedruthan Steps gets its name from the mythical giant Bedruthan, who hopped along the rocks on the beach as if they were steppingstones. The first written record of the name is in 1847, supporting the theory that the legend was a colourful Victorian creation to drum up tourism in the area. Each of the rocks are affectionally named from north to south; Queen Bess, Samaritan Island, Redcove Island, Pendarves Island, and Carnewas Island. Swimming isn’t recommended at the Steps due to the strong currents, big waves and large rocks, but it isn’t forbidden so if you go in for a dip, just take care. The nearby and well-known town of Padstow is worth a visit for lunch, if a little touristy in the summer months and a bit of a Rick Stein toytown. The Beach Hut at Watergate Bay is also a great spot for a seaside lunch, serving local seafood and handpicked wines. 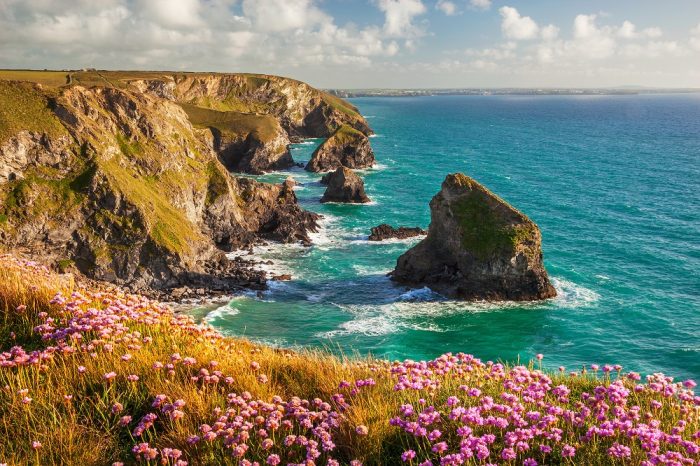 You’d be forgiven for thinking this small yet totally secluded beach was somewhere on the Grecian or Croatian coast but in fact, these unbelievably clear-blue waters actually belong to one of the southern-most beaches in Cornwall. The headland to the east of the beach is the location of the famous Logan Rock, an 80-tonne rock which is angled so that a single person can move it back and forth. To add to the Grecian-style scenery, a few miles down the road is the Minack Theatre, an open-air theatre built into the cliff and jutting into the sea at the turn of the 20th century. The beach has become a little better known in recent years after been featured on BBC’s Poldark as Nampara Cove and beware of the incoming tide or you’ll get stranded with a fairly epic cliff climb ahead of you. 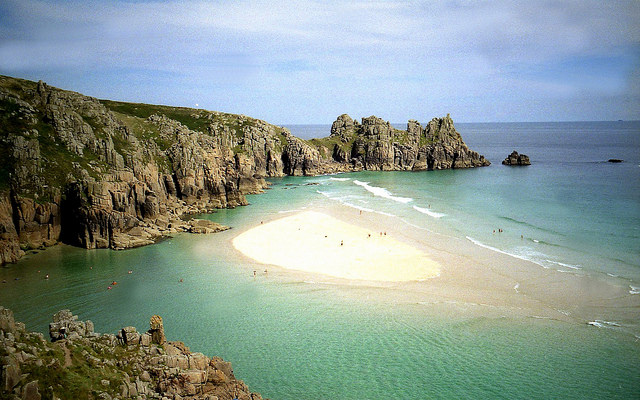 This beauty is truly hidden, but if you’re up for a bit of a bit of adventure you’ll be justly rewarded! Once you reach the National Trust car park a mile east of Polruan near Fowey, then take the well-marked footpath across the road into a field. As you walk over the brow of the hill, you’ll be greeted with your first view of the stunning sand and shingle beach, with its cove and towering cliffs. The trek down to the inviting waters takes about 20 minutes, so take your time and enjoy the view. Camping, campfires and swimming are encouraged in the bay but be aware, as on all Cornwall beaches, that there the currents are strong.

Truly the definition of a hidden gem, Bosahan is a secluded cove only accessible by foot, surrounded by subtropical gardens of Bosahan and ancient woodland. You can either walk roughly a mile along the coast, arrive by boat from a neighbouring beach or walk down through the beautiful Bosahan Estate, if it’s open. The surrounding woodland and relative quietness of this beach give it a distinctly ‘shipwrecked’ feel, and with a view framed by coastal trees, you’ll want to stare at the passing yachts all day.

Please remember when swimming anywhere in the world to be aware of tides and strong currents!

Riding The Slide at ArcelorMittal Orbit!
The Belgian artist Carsten Holler describes a slide as 'somewhere…
The Wicked Musical Show – The Untold Story of the Oz Witches
Based on Gregory Maguire's best-selling novel, Wicked is a spellbinding…
Five Unusual Photographs Of The London Underground You May Have Missed
The London tube is a fascinating thing, especially for visitors…
TravelBlog Categories
Follow Us
Popular Posts