There’s no denying that London feels especially magical at this time of the year as it lights up its streets with glittery illuminations, decorations and Christmas trees, possibly making even the toughest of bah humbugs feel a little festive cheer. So why not wrap up warm, soak in all the good pre-Christmassy vibes and see for yourself how London dresses up for what some feel is the most wonderful time of the year? We’ve listed some of the best Christmas lights in the English capital below – have your cameras ready and enjoy…

Not sure where to begin? Let us do the hard work for you and see the city’s best Christmas lights all in one go on our fabulous London by night Christmas Lights special tour!

One of London’s most recognisable Christmas lights displays in recent years, the beautiful spirits of Regent Street – aptly named ‘The Spirit of Christmas’ – look pretty magical hovering along this curved street that joins Oxford Street and Piccadilly Circus. 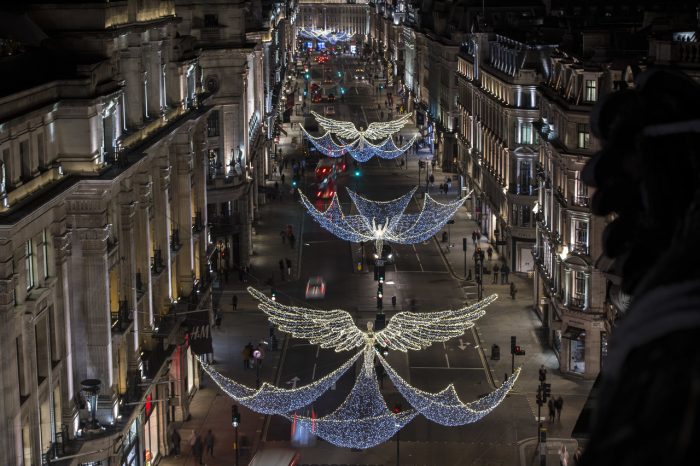 The iconic street changes its Christmas lights every year, usually touching on a topical subject that’s not necessarily Christmas related and always ensuring the result is spectacular. It’s no different in 2019, as the team at Carnaby have gone all out with a strong message that is highly significant, as well as a visual treat.

Collaborating with the ocean conservation charity Project ZERO, Carnaby Street has been adorned with gorgeous marine scenes that feature whales, crabs, jelly fish and many more sea creatures. The display itself is very sustainable, as most of the pieces used are either recycled, repurposed or reusable. More importantly, it highlights the urgent need to protect and restore the ocean. 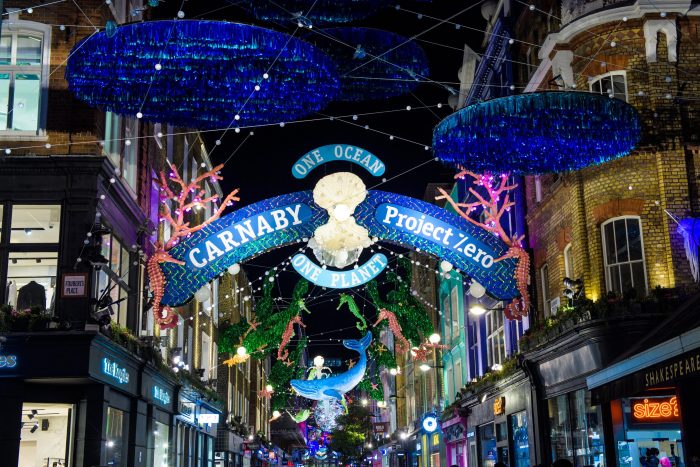 Get off at the underground station Bond Street to not only catch a glimpse of Oxford Street’s Christmas lights but to also enjoy even more sparkle at New Bond Street, Old Bond Street and many of its surrounding paths. As well as the pretty peacock feather lights that elegantly line this succession of streets, the fact that the areas’ many businesses (from retailers to hotels and private member clubs) go all out with incredible Christmas installations make strolling around this affluent district an absolute visual feast. French luxury jewellery brand Cartier’s stunning red hot storefront representing a present is a firm favourite amongst bloggers and Instagrammers, while the iconic Claridge’s Hotel always puts on a show to remember when it comes to unveiling its Christmas tree. 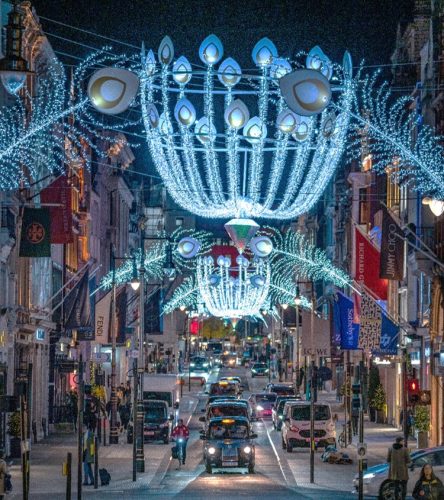 Undoubtedly one of London’s most Christmassy areas, Covent Garden is an absolute must-see during the holiday season. From a gigantic 55-foot Christmas tree decorated with over 30,000 lights to its iconic piazza dazzling with enormous Christmas baubles resembling disco light balls, the grounds of Covent Garden are likely to melt even the coldest of hearts. Dare we even say that you’ve not experienced Christmas in London until you’ve visited Covent Garden? 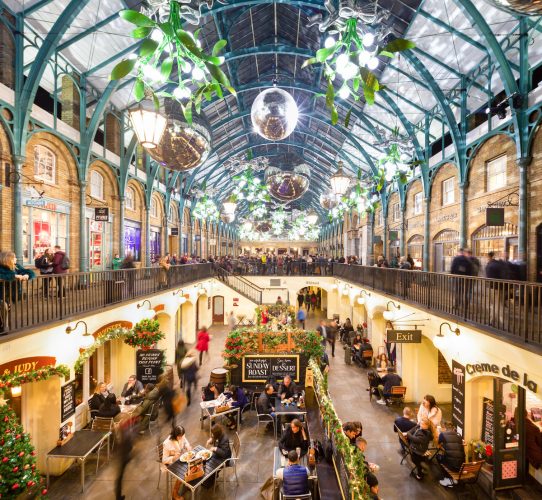 The North West London area known for its world-famous stadium may not be the first place you would think of in regards to fancy Christmas lights. But over the past few years Wembley has been undergoing a huge revamp, steadily becoming a thriving neighbourhood with lots to see and do.

This Christmas, it’s stepped up its game with Winterfest, a striking display of light installations in close proximity to the stadium. Created by artists from all over the world, these works of art are a technicolour playground – our personal favourite is the Sonic Runway, a 130 metre-long corridor of kaleidoscopic rings created by Californian artists Rob Jensen and Warren Trezevant. 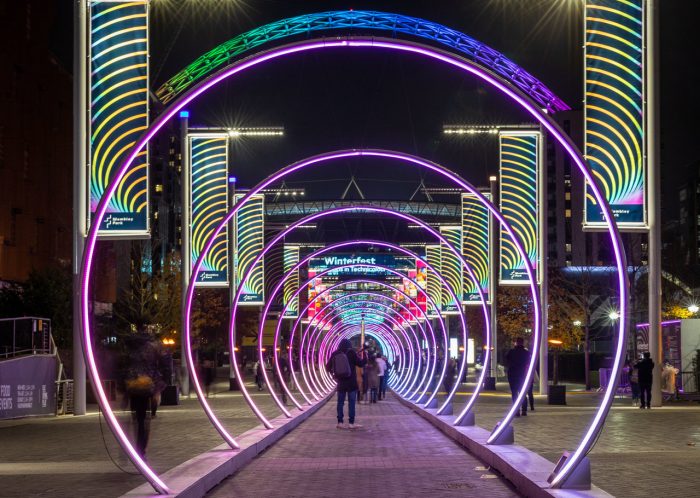 The all-new and very hip food and retail hotspot in King’s Cross has gone for a charming “Northern Brights” theme, filling its surroundings with vibrant hues you’d encounter when witnessing northern lights and offering a multitude of Christmas activities and workshops throughout December. What we’re really taken with however, are the yard’s brightly coloured Christmas trees – 100% worth going to see during the day. A charming, cosy, no longer hidden but still low-key corner just a stone’s throw away from Victoria station, Eccleston Yards is consistently coming up with creative pop-ups and installations in the midst of its elegant series of shops, restaurants and wellbeing hubs. So it comes as no surprise that its Christmas installation is not your traditional festive set-up.

Chromotherapy Christmas has been aptly described as an alternative Christmas light experience by offering visitors an immersive (and very photogenic) array of multi-coloured illuminations resembling Christmas baubles. Tying in with Eccleston Yard’s love for all things lifestyle and wellbeing related, the installation promises to not only light up the hub itself but to also offer visitors a ‘calming energy balance’ (as well as an unmissable photo op). 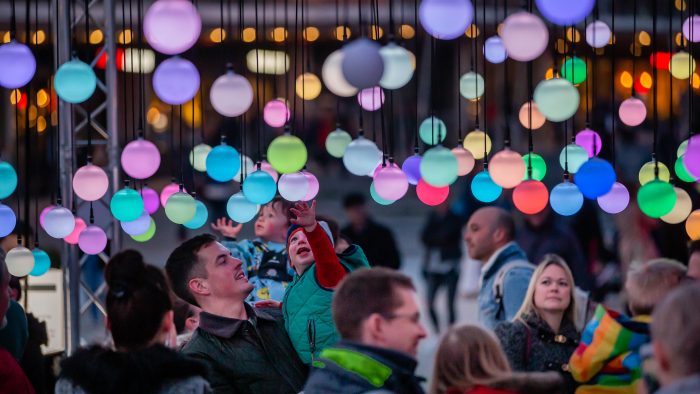 We know perfectly well that Winter Wonderland is not a light installation per se, but hear us out. If you want to see a plethora of bright lights, experience a huge German food market right in the middle of London and go on a ride or three, Winter Wonderland ticks all of those boxes and many more. With stunning decorations and lights throughout, wow-factor bars, workshops, comedy shows and much more, it’s fair to say you’ll have everything you need to get into the Christmassy spirit at the mother of all Christmas markets. The admission to Winter Wonderland itself is free, as you only pay for the rides and shows you take part in – making it easy for you if you just fancy a stroll to soak up that festive atmosphere. 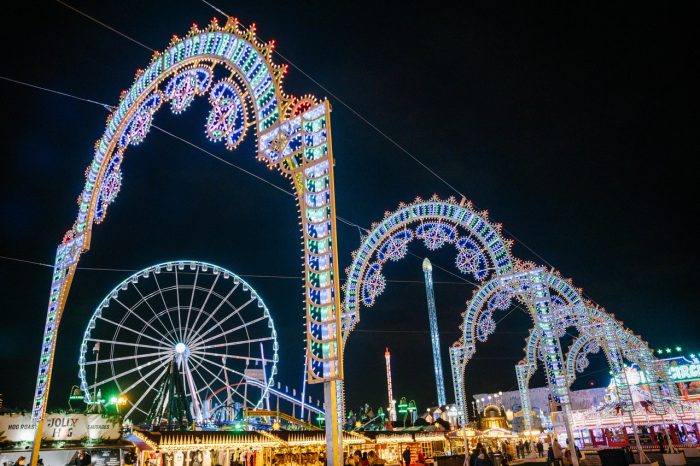