There are just too many places we wanted to add to this list, so we had to split in two. From the spooky forests of Poland to the beaches of Mozambique, here’s another five incredible places you didn’t know exist.

In western Poland, right on the border with Germany is one of the world’s unexplained phenomena. Zrywy Las or The Crooked Forest is made up of trees that are all identically bent. Hovering inches above the ground, the 400 trees grow at a right angle facing north, then shoot dramatically upwards in ‘J’ shapes, and now one knows why.

Like something out of Alice in Wonderland, the eerie trees were most likely planted around 1930 by farmers from the town of Gryfino, manipulated into their interesting shape to be used in boat building. With the outbreak of WWII in 1939 and the German invasion of Poland, Gryfino was all but destroyed, and the purpose of the gnarly trees with it. 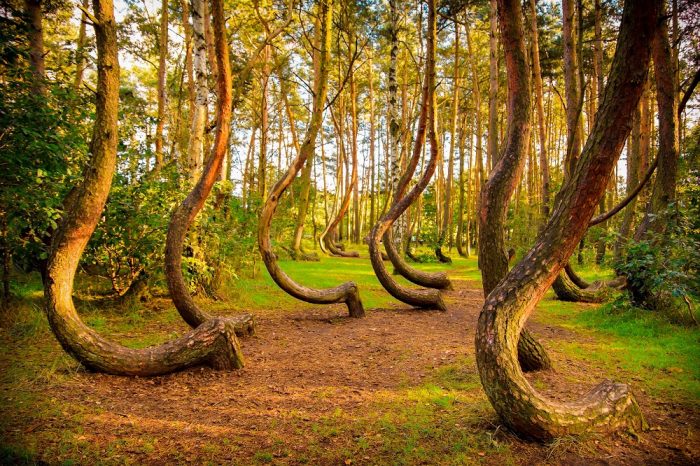 Some believe it could be a genetic malfunction, most believe it was human intervention, but some locals believe something far more sinister. Gryfino is just over the border from Germany meaning it was right in the firing line at the beginning of the brutal German invasion of World War II. The village was destroyed and remained uninhabited until the 1970s, leading some local hearsay to report that the trees are curved because of the trauma of the war, and some say its good old-fashioned witchcraft. Visit early in the morning to see the light shining through the fascinating trees, or in the winter in you want a creepier experience.

Mozambique is a country of stunning unexplored jungle and pristine beaches, and plenty of opportunity for adventure. This mysterious southeast African country is often overlooked by travellers, but those who do make the journey find incredibly diverse wildlife, remote archipelagos, incredible surfing, Afro-Portuguese fusion food and age-old traditions. Add to this a vibrant night life and beautiful colonial architecture and Mozambique has something for every traveller. 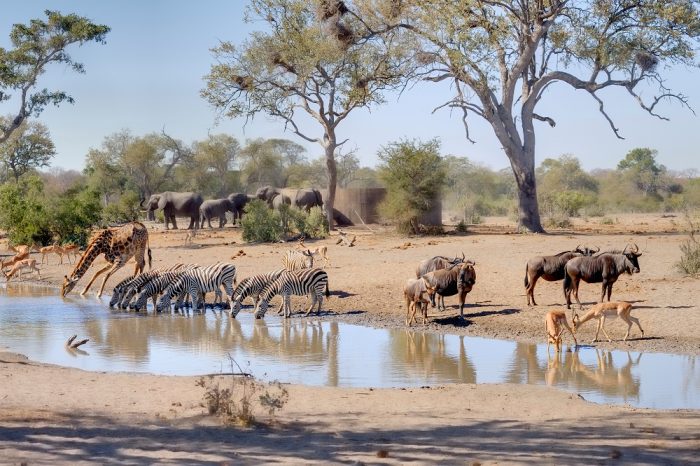 Animals taking a drink in the Maputo Elephant Reserve, Mozambique

To the north of Mozambique you’ll find ecosystems barely touched by humans, the scarcely explored Niassa Resever and palm-fringed islands of the Quirimbas archipelago, the historical legacies of Ibo and Mozambique Island, and to the south, you’ll find the vibrant Maputo. The busy seafront capital city is full of well-preserved Portuguese colonial architecture, jazz bars, amazing seafood, and young entrepreneurs which give Maputo an exciting and electric quality. While we all like a city, and Mozambique is full of stunning places to put on the list, the beach at Milibangalala beach is worth the drive. It’s situated in the Maputo Special Reserve, a nature park home to elephants, zebra, hippo and giraffe, among other African animals. The beach is well known for surfing and fish eagles’ nest in the trees that line the shore.

One of the lesser visited Balkan Countries, the beauty of Bosnia is often overlooked due to the shadow of the Bosnia War, which ended in 1995. In recent years Bosnia has seen a huge influx in tourism as people discover the beauty and history of this underrated country.

The Kravica Waterfalls are roughly 40 minutes by bus from the beautiful city of Mostar, or just over 2 hours by train from Sarajevo. One of the most popular spots in Bosnia, the imposing waterfalls are relatively unknown outside the Balkans. 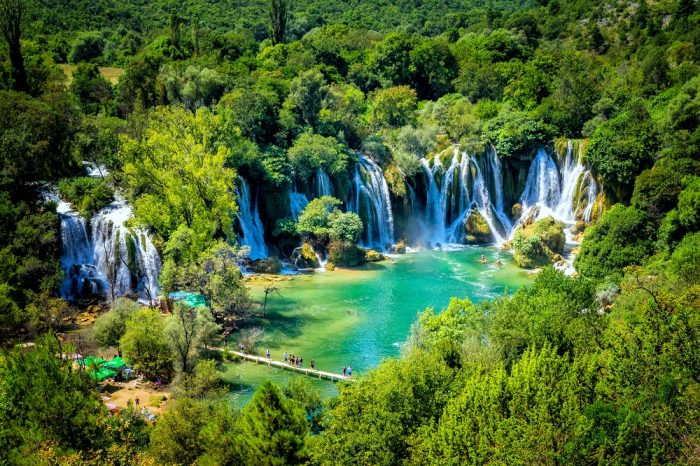 The stunning Kravica Falls in Bosnia

Bosnia is less than four hours away from the UK by plane, and flights can be as inexpensive as £90. If you head to the Kravica Falls from Mostar, it’s worth spending a night or two in the beautiful city. Built on the Neretva River, the 16th century Old Bridge is one of Bosnia’s most visited landmarks and is an incredible example of ancient Islamic architecture.

The waterfalls themselves are a stunning place to spend the day, you can swim in the cool green pools, picnic wherever you like and take a boat trip around the falls for roughly £4 per person. You can also visit the ancient village of Pocitelj once you’ve had your fun in the water, about 25 minutes away from the Kravice waterfalls, famous for its fresh fruit juices, the perfect way to cool down after a day in the sun. Summers in Bosnia average about 30 degrees Celsius making it the perfect alternative summer adventure location.

Cocos Island National Park is in the Pacific Ocean about 330 miles off the coast of Costa Rica and a few hundred miles north of the equally bio-diverse Galapagos Islands.

This one is not for faint hearts or shallow pockets. Cocos Island is in Costa Rica, one of the last remaining wildernesses on the Earth, famous for its beaches, volcanoes, and rainforests teeming with wildlife including spider monkeys and rare birds. You’ll have to book a tour if you want to visit the island, either just to walk around or a scuba trip.

Cocos Island is the island people think they don’t know but they do, as certain historians claim that is was the inspiration behind for Robert Louis Stevenson’s novel Treasure Island. The island used to be a popular hideout for pirates and thieves and many legends have offered stories of how various buccaneers buried their treasure on the island. 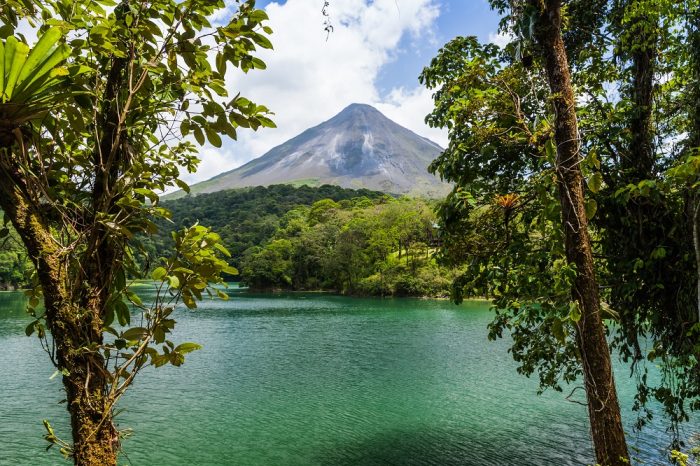 A UNESCO World Heritage Site, the island is completely uninhabited so the wildlife literally runs free both on land and sea, and it’s the ocean life that visitors to the island flock to see. The largest schools of Hammerhead sharks in the world live in the waters off Cocos Island and are easy to spot, as well as dolphins, whales, turtles and rays, making it one of the most diverse and exciting places to scuba dive in the world. Scientists have also said that Cocos Island has a rare ecological character, different to any other island, making it completely unique.

The remoteness of Cocos Island means that you’ll have to get there through a tour company. From the port of Puntarenas it’s a 32 – 26 hour boat ride and live aboard scuba tours often include transport to Puntarenas from your hotel in San Jose. You never know, maybe you’ll unearth some buried treasure?

Nestled among the varied landscapes of India’s snow-capped mountains, vibrant forest and lush green fields are a host of beautiful hill stations, the perfect respite from the scorching cities.

The tea producing regions of Assam, Darjeeling as well as Munnar are three of the most popular hill stations in India but they are just the tip of the iceberg. Among the lesser known hill stations is the stunning Dzüko Valley in the state of Nagaland, situated 2,452 meters above sea level and known for its wide variety of flowers including the Dzüko lily, which is only found in this magical valley. The Japfu hills add to the beauty of the valley and are a perfect place for hiking, or you can just take a stroll among the beautiful flowers. 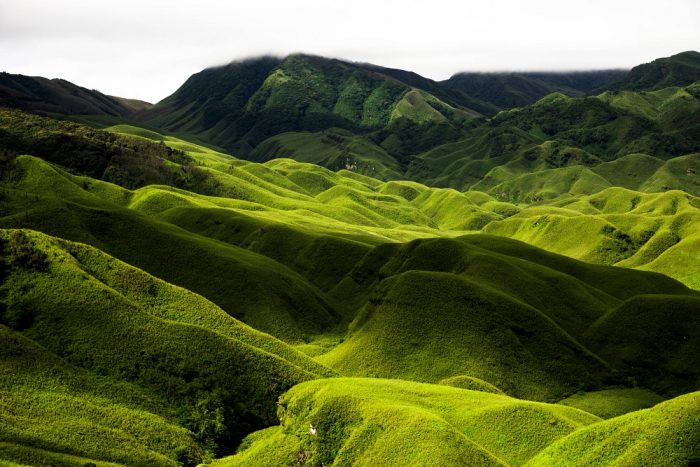 The rolling hills of Dzüko Valley in Nagaland, India

The magic of the hill stations is their juxtaposition to the cities of India. Bangalore, Mumbai, New Delhi, all incredible places to visit, but arguably not a relaxing experience. Millions of tourists flock to India every year to see the Taj Mahal in Agra, or The Red Fort in New Delhi, walking through the bustling streets and taking in the noise and smells. What you’ll find in the hill stations a different, tranquil side to India. The best time to visit this veritable Eden is from October to May and to reach the valley you’ll need to trek from either Zakhama village or Visvema village. Foreign visitors must either register themselves at the local state government office in Kohima or Dimapur in Nagaland.