The Belgian artist Carsten Holler describes a slide as ‘somewhere between delight and madness’, and after sliding down his latest creation, the tallest and longest tunnel slide in the world at the ArcelorMittal Orbit in Stratford, we are inclined to agree!

The newly opened and permanent feature at The Orbit is an incredible mix of art, science, engineering and sheer exhilaration – a wild 40 second ride that will have you reeling in disbelief and wanting more!

We were lucky enough to try it out for ourselves on Monday night. read on for our full review.. 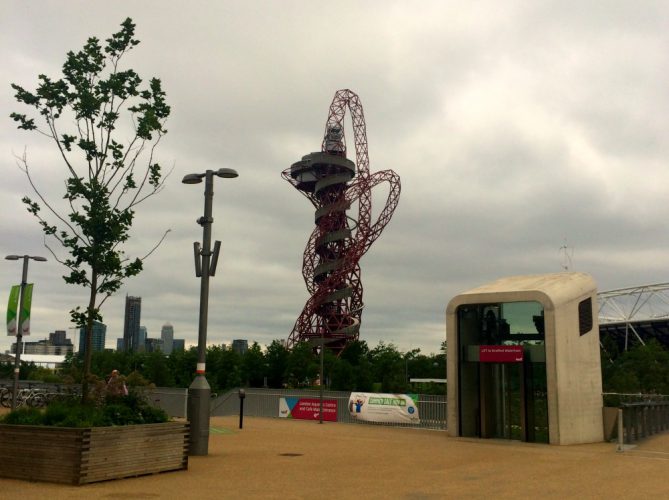 The ArcelorMittal Orbit is situated in the middle of the Queen Elizabeth Olympic Park (nearest station: Stratford), a gorgeous green open space created for the London 2012 Olympics.

As we approached The Orbit, which is between the Olympic Stadium and the London Aquatics Centre and is the tallest sculpture in the UK, it became quite clear how incredibly high the slide actually is! The nerves began to kick in. 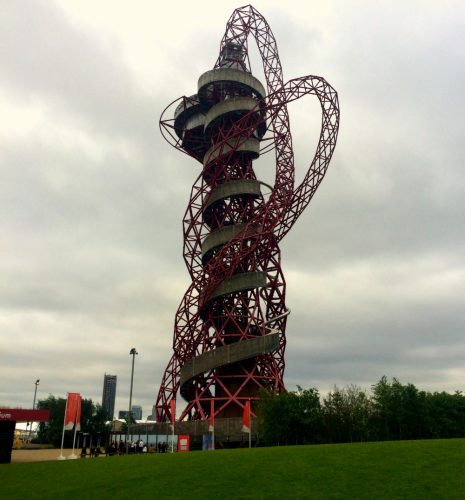 The slide is 76 metres high and 178 metres long. It is the highest and longest tunnel slide in the world, making it one of the most fun and unique things to do in London. Sliders need to be at least 1.3 metres tall and it’s for both adults and kids, so it’s fun for all the family. 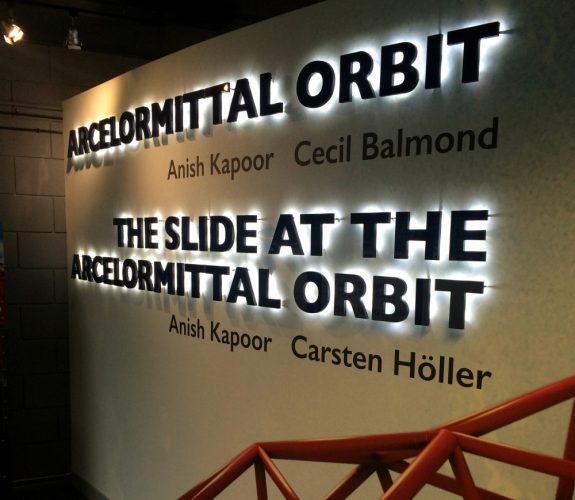 When you book your slide experience, the time shown will be the time slot for your slide. Make sure you arrive about an hour early, so you have plenty of time to enjoy the view from the top before you whizz to the bottom.

As we entered The ArcelorMittal Orbit, we had a look at the small exhibition about how The Orbit was designed (by British Indian sculptor Anish Kapoor) and learned how the slide was  brought to life. 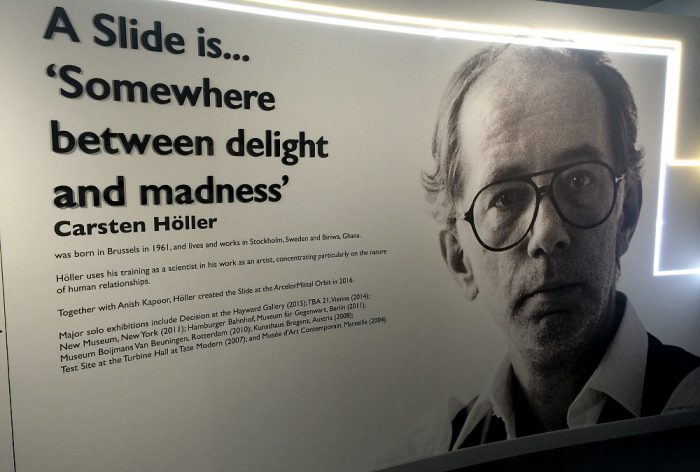 Next, it was time to walk under the impressive dome of The Orbit and board the lift, which zoomed us up to the viewing platform  to enjoy the beautiful views of London, spanning up to 20 miles. 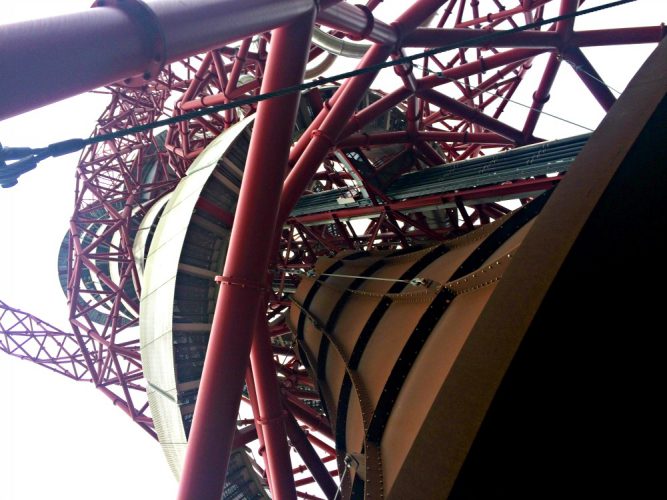 We had arrived in plenty of time, so we took pictures and enjoyed the view. There are also interactive maps which helped us find out what exactly we were looking at! 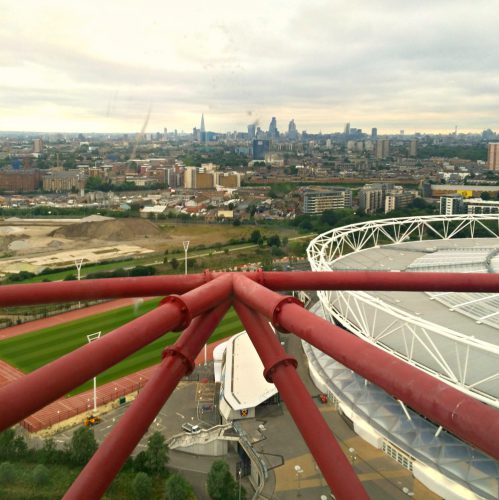 We recommend you venture out to the open-air balconies, – not only are the views beautiful, but below one  of the balconies is the ‘bettfeder’ of the slide – the German word for bedspring! You can get an amazing picture of the corkscrew section of the slide by positioning your camera lense in line with one of the small holes in the balcony floor – this is how we took the photo below! 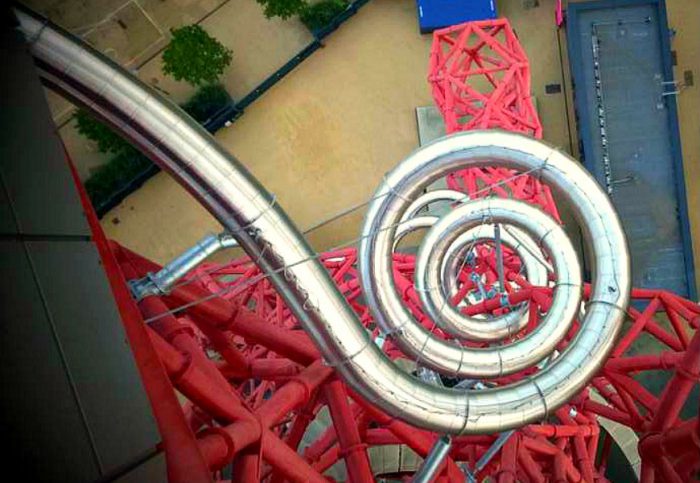 As we enjoyed the view, the anticipation  and nerves built more and more!

When it was time for our slide slot, we descended to the floor below the viewing platform and got ready to ride the slide. The staff were very friendly and helpful and helped to kit us out in protective elbow pads and headgear – it’s very stylish I am sure you’ll agree! 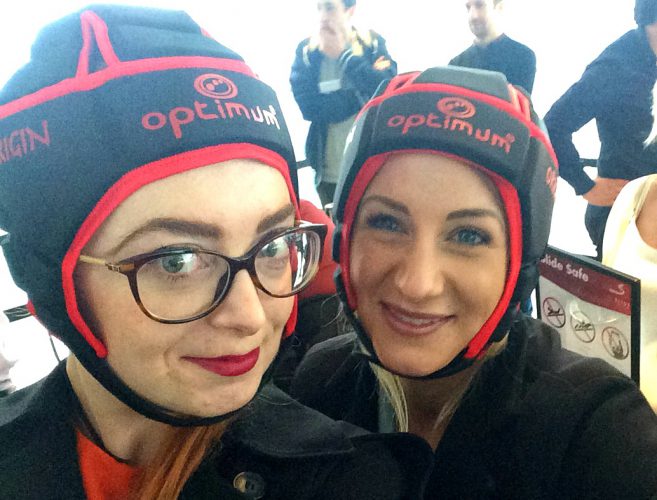 As we waited, we could hear the excited screams of the sliders that went before us.

When it was finally our time to slide, the nerves were washed away by the amazing staff, who have all ridden the slide many times over. They put us at total ease and explain the best position to slide in, then it was time! First our Product Manager Caroline descended, then a minute later it was time for me to go!

Over in under a minute but the effects last for much longer, the ride itself is a total adrenaline rush! 40 seconds of pure joy, intense speed, twists, turns, all experienced at a speed of about 15 mph (it might not sound like much but it feels so fast). 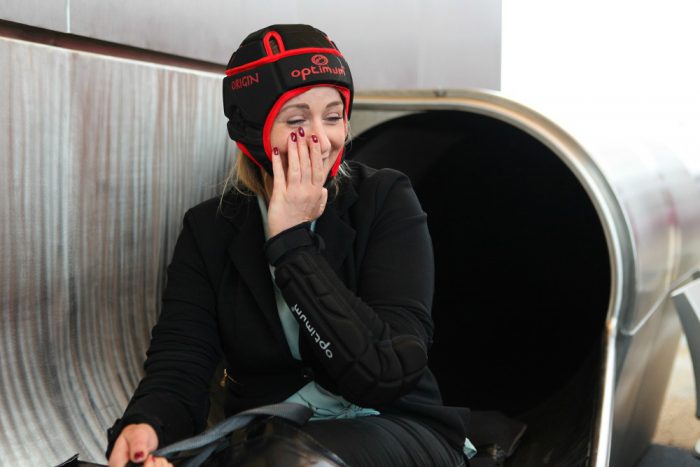 The slide give you a truly thrilling feeling and makes you feel like a kid again. We can’t recommend the slide enough and think every visitor to London should give it a try!

As London’s newest attraction, we recommend booking well in advance if you want to #RidetheSlide, book your tickets here!

Are you brave enough to try the slide?