Today (22.04.2020) is Earth Day and it’s a more poignant one that ever before. Physically cut off from the rest of the world, the campaigns to save the planets areas of natural beauty feels like more of a struggle than ever but, on the positive side, we’ve been able to take a step back and forcibly reduce things like carbon footprint and pollution and see the immediate results. We’ve put together a 2-part list of ten incredible and lesser-known places in the world, from areas of unbelievable biodiversity to phenomena you have to see to believe.

Turkmenistan may not be high in many peoples travel list and that is a huge shame. The beautiful Central Asian country shares a border with fellow ‘stans’ Kazakhstan and Afghanistan as well as Iran and the Caspian Sea, the connective body of water between Asia and Europe. Turkmenistan has been at the crossroads of civilisations for centuries, an important and strategic country and an essential stop on the Silk Road trade route through Asia and Europe. Turkmenistan is the least travelled country in Central Asia, so its mysteries and secrets are perfect for the intrepid explorers among us. Contrary to what many believe due to a potential mix of geographical location and ignorance, Turkmenistan is a relatively safe country with a currently stable political situation and low crime rates. Tourism is on the up but it’s a fairly new concept so travellers will often find locals curious in rural areas, but its more often than not friendly intrigue, and if you linger long enough you’ll probably be invited in for tea and food, and it’s absolutely fine to do so.

The Darvaza Gas Crater known as the Door to Hell, is a natural gas field that has collapsed into a cavern in Derweze, a town of 350 people in the middle of the Karakum Desert. Geologists set it on fire to prevent the spread of harmful methane into nearby towns, and the 69-metre-wide flaming abyss has been burning continuously since 1971. 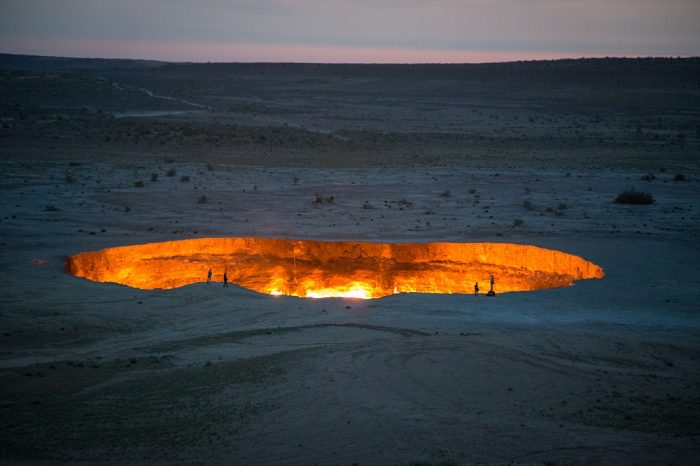 Entry Requirements: You’ll need a full visa to enter Turkmenistan and you’ll usually need a letter of invitation from a Turkmen tourist agency that is only issued upon booking a full tour. It’s pretty difficult to navigate your way through Turkmenistan without a full guide due to pretty restrictive tourism. Turkmen wants to encourage tourism but they’re not quite ready for you go backpacking off on your own.

Another Central Asian country, Kyrgyzstan is a beautiful landlocked country characterised by ancient Islamic architecture, unspoilt high mountainscapes that have preserved its ancient culture, and vast crystal-clear lakes. Another Silk Road thoroughfare, Krygz culture is a historic combination of its own Turkic origins as well as elements of Persian, Mongolian and Russian influence. Tourists from a large amount of countries don’t need a visa to get in to Kyrgyzstan, making it more accessible than the surrounding Turkmenistan or Uzbekistan, despite only opening its borders in 2012.

Issyk Kul lake is one of the country’s biggest attractions that nobody has heard of, a crystal sharp lake with warm beaches surrounded by snow capped mountains. Issyk Kul means ‘warm lake’ in the Kyrgyz language, and although you can camp on its beaches gazing in to the distance as the sun goes down over snow-capped mountains, the lake never freezes. The lake is salty so bare that in mind if you plan to go for a dip, it’s also freezing, but it’s well worth it as the water is shockingly blue, turning from an light ice blue to a deep cobalt the deeper you go. Kyrgyzstan, like its neighbour Kazakhstan, has pretty relaxed rules in more rural areas when it comes to where you can camp. There are hotels around the lake, but they might be closed during low season and camping on the beach is much more fun. Some parts of the lake are pretty remote, and shops and restaurants are scarce, so make sure you have plenty of food, water and beer. 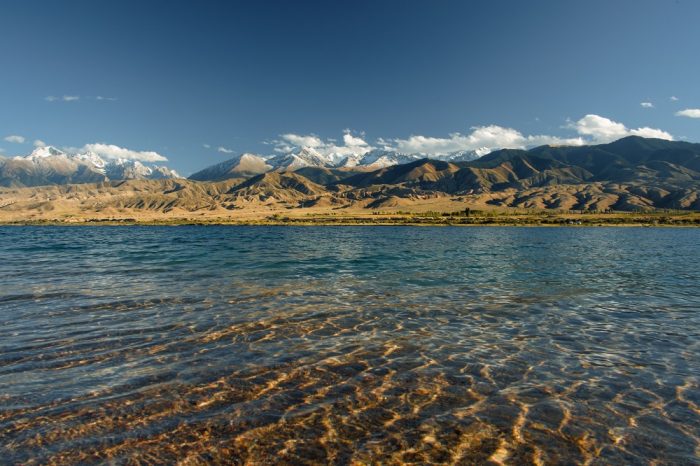 Entry Requirements: British nationals do not need a visa to enter Kyrgyzstan for up to 60 days.

Georgia in the Caucasus region of Eurasia bridges the gap between Europe and Asia and is a highly underrated country with a dramatic and long history. A prolific wine making country with a vibrant capital, well preserved medieval architecture, beaches with crystal clear sea and incredible mountain ranges, Georgia is the perfect relaxing and adventure holiday destination that no one is talking about.

The Mtirala National Park is a protected area in Western Georgia covering roughly 38,790 acres between the Black Sea and the Adjara Mountains. Although technically a forest, Mount Mtirala is one of the most humid areas in the country and with waterfalls and an abundance of flora and fauna, you’d be forgiven for thinking you were in an exotic jungle.

There are 2 marked and comfortable trails in the park, and yet again camping and campfires are allowed. Horse riding, hiking, bird watching, and adventure tours are also available. The Chakvistskali River runs through the park and the stunning 28 metre Tsablnari Waterfall, perfect for a cooling dip. Brown bears, roe deer, wild boar, eagles and owls, birds and snakes live in the park, making Georgia the perfect exotic location with touches of the familiar. 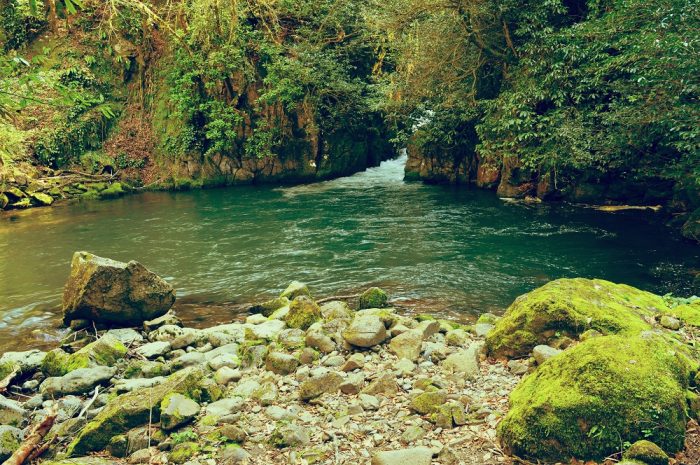 The perfect lagoon for a dip in Mtirala National Park

Entry Requirements: British nationals do not need a visa to enter Georgia for up to one year.

The natural beauty of Korea is often eclipsed by complicated political situation, images of busy built up cities, and recent military history. Despite its history and testing relations with its northern counterpart, Korea is becoming an increasingly popular travel destination, a place of delicious cuisine packed with beautiful scenery, unique within Asia.

Jeju is a semi-tropical island found just off the southernmost coast of South Korea’s mainland. It’s home to the country’s highest mountain, Hallasan, which is perfect for hiking and gives some of the best views in the country. What makes this mountain unique is that if you see the hike all the way to the top, you’ll find the crater of an extinct volcano full of ‘lava tubes’, formations in the rock made by ancient lava trails.

Often called the Hawaii of Korea, Jeju has a subtropical climate and 200km of beach including Geumneung Beach, a huge expanse of white sand and clear sea with the nearby Geumneung Village of traditional houses and pretty narrow streets. It’s also known for its good surfing, home to the first surf club in Korea as well as the stunning Cheonjiyeon Waterfall.

Being an island, it’s no surprise that there is some seriously good food to he found on Jeju. Naturally seafood plays a big part and the island is famous for its abalones, traditionally hand dived by haenyeo, Jeju’s mermaids, or female divers who dive to depths of up to 15 metres to get the abalones, as well as octopus, sea urchins and oysters. Black pork is another speciality, succulent pork made from domesticated black pigs only bred on the island. Try Black Pork Street, a whole street dedicated to the meat. 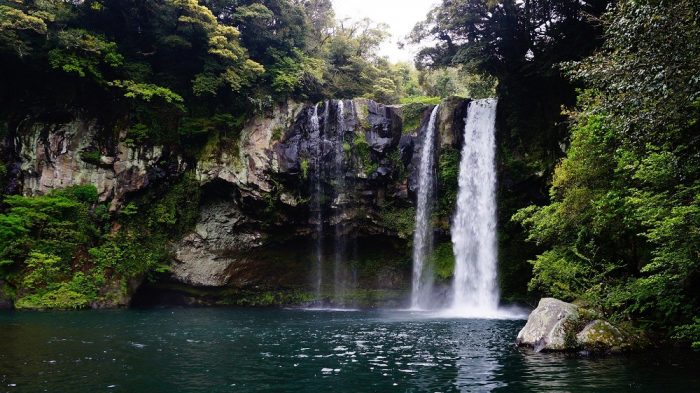 Cheonjiyeon Waterfall on the island of Jeju, Korea

Entry Requirements: British nationals can enter South Korea for up to 90 days without a visa and you must have an onward ticket.

More commonly known as the Redwoods, these gigantic trees are most commonly found in the coastal forests of North California and are the largest trees in the world. Most people have heard of the Redwoods, but people who haven’t seen them in the flesh might not quite be able to comprehend exactly how big they are, or how incredible.

The first Redwood’s showed up on Earth shortly after the dinosaurs, before flowers, birds, spiders and humans, roughly 240 million years ago as opposed to modern humans who arrived about 200,000 years ago. The oldest official redwood is at least 2,200 years old and the tallest is over 360ft high and they can reach up to 20ft in diameter. That’s taller than the Empire State Building and the clock tower of Big Ben, and almost as tall as the Great Pyramid of Giza! Since the California Gold Rush of 1848, 95% of the redwoods were cut down to build and rebuild cities like San Francisco and San Jose, so many of the ones still standing are only about 50 years old. Rare wild animals like mountain lions and coho salmon rely on the local redwoods, and tens of thousands of people flock to see the gigantic trees every year. It’s almost impossible to comprehend the size of these woodland giants. 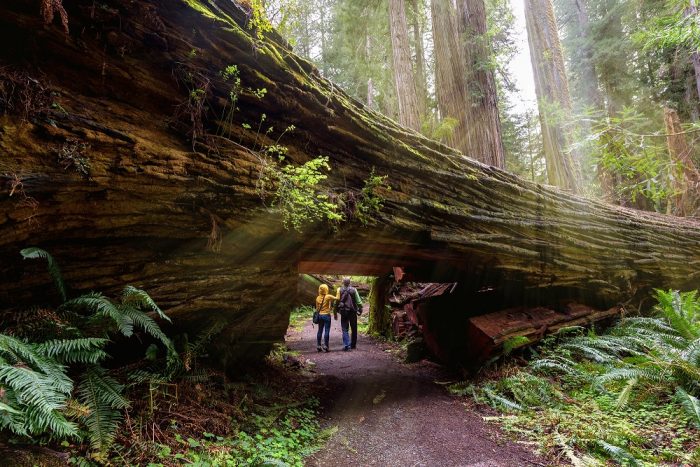 A couple walking under a giant Redwood in Redwood National Park, California

Entry Requirements: British nationals can apply for an online ESTA as part of the Visa Waiver Program which is valid for up to 90 days. For a full US visa you’ll need to fill out a longer DS-160 form and attend an interview at a US consolate or embassy.