If It’s Your First Visit To London Or 50th, Don’t Forget To See Trafalgar Square

The beating heart of London, Trafalgar Square keeps you coming back time and time again! You can never get enough of this city hotspot as there will be something different going on every time you visit. Even if you don’t visit on a special occasion, simply sitting by the fountains or Nelson’s Column and watching the world go by is a top London experience. The National Gallery, National Portrait Gallery and St Martin-in-the-Fields are all a stone’s throw away too!

From celebrations to demonstrations and filming to photography, Trafalgar Square has a buzzing atmosphere 365 days of the year.

Trafalgar Square: From the beginning

It has been a well-loved meeting place for Londoners as far back as the Middle Ages! Originally called Charing, it later became known as Charing Cross. It was then named Trafalgar Square in honour of Lord Nelson’s victory at the Battle of Trafalgar in 1805.

From the 14th to the late 17th century, a great deal of the Square was the courtyard of the Great Mews stabling. Development by the architect John Nash began in 1812 – he wanted Trafalgar Square to be a cultural space that the public could enjoy. The Square has changed considerably since its beginnings 200 years ago and 2003 saw the end of an 18 month construction project to remove traffic from the north side of the square and improve the wider area.

A number of fantastic sights and attractions overlook the Square – some are easier to find than others! 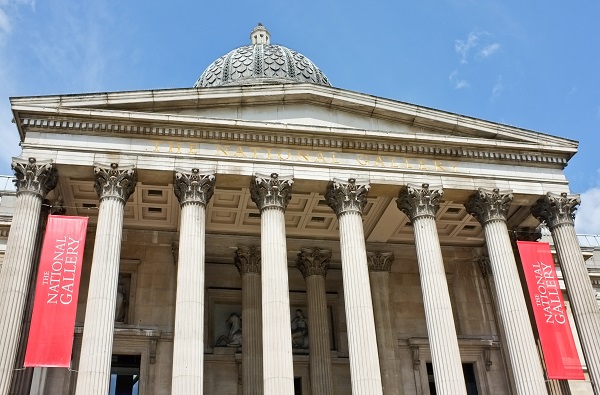 On the north side of Trafalgar Square is the glorious National Gallery. Home to one of the greatest collections of paintings in the world, the National Gallery dominates the Square and undoubtedly adds to its historical beauty. It’s free to visit too! From Van Gogh’s famous ‘Sunflowers’ painting to ‘The Entombment’ by Michelangelo, this treasure trove of artwork is a must-visit.

At the north-east corner of Trafalgar Square is St Martin-in-the-Fields. This parish church dates back to 1222 and stood in the fields between the City and Westminster! The fields are long gone but the church still retains its original name. St Martin-in-the-Fields has an illustrious history; it was the location of the first religious broadcast and its musical tradition includes performances by Handel and Mozart. There are daily church services and free music every weekday, plus ticketed evening concerts from Thursday- Saturday. A simple walk around the Square will get you up close and personal to a number of famous statues and monuments. Admiral Horatio Lord Nelson towers over the Square from his perch atop Nelson’s Column, guarded by four huge lions. You’ll also find a statue of King George IV riding his horse, a statue of Charles Napier and a statue of Henry Havelock on three separate plinths. The fourth plinth is a temporary display of modern culture, merging the old and the new. You’ll find more famous figures dotted around the area too.

Trafalgar Square also has two beautiful fountains at its centre with up-to-date LED lights that can change colour and illuminate the dancing water after dark.